How to Re-Energize Stalled Career Growth 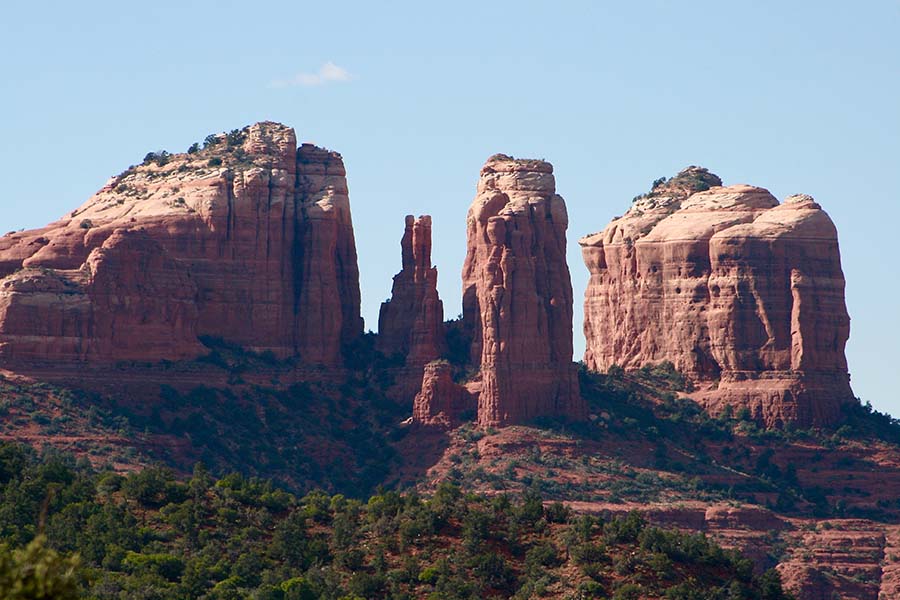 Despite our fondest wishes, career progress isn’t always a straight, upward trajectory. For most of us, it looks more like the Colorado Plateaus, which the folks at Encyclopedia Brittanica (remember them?) describe as “dominated by high mountains … gashed by river canyons or scarred with dry gullies … great shallow basins, sunken deserts, picturesque buttes and mesas, and rare verdant sections of valley.” I don’t know about you, but that’s a pretty accurate description of the vast and ever-changing landscape of my career. Steep learning curves. Deep river canyons where powerful external forces sweep me along at a terrifying pace until a back eddy mercifully ends the ride. Feelings of powerlessness as I contemplate impossibly massive projects. Working alone in vast empty stretches of desert, where not a single idea takes root. Plateaus in energy or growth that seem to go on for ages interspersed with abundant gardens of productivity. Sound familiar? When things aren’t progressing the way we’d like, negative emotions tend to bubble up, further stalling our momentum. Fear, worry, envy, and shame become our companions and our guides. In our worst moments, it’s tempting to let these emotions overpower our higher selves. These emotions commonly manifest in three ways.

If we aren’t practicing the emotional intelligence skills of self-awareness and impulse control, we’ll project those unpleasant emotions outward in an effort to relieve our own pain. This may take the form of harsh judgment or subtle attempts to sabotage someone who probably doesn’t deserve it. A mistake I made early in my career is a good (and by “good,” I mean “embarrassing”) illustration. A new sales manager joined the dealer network I managed, and I was harshly critical of his abilities. I was feeling insecure about my status, but couldn’t articulate my feelings at the time. I wasn’t mature enough to face my own fear-fueled emotions and deal with them honestly. I chose instead to share my unkind assessment of him with one of his salespeople. (Oh, yes, I did.) I was so worried about how I would stack up by comparison that I attempted to recruit someone to validate my superiority as a leader, which is clearly the most un-superior, un-leader-like thing I could have done. Adding self-injury to insult, the very things I was accusing him of were the things I feared were true about myself. I had said, “He doesn’t know what he’s doing.” It was a textbook example of projection and a thoughtless attempt to undermine a colleague. It certainly didn’t lessen my pain, and I missed an important opportunity to catch my sneaky inner critic in the act of shoplifting my faith in my own competence. Of course, it got back to him, and he confronted me with my exact words. The shame was horrific. I felt the opposite of superior, proving once again that without emotional self-awareness, compounded by a paucity of impulse control, we are doomed to manifest exactly what we don’t want.

Want to avoid these pitfalls? Do these three things.

First, step away from the ledge. Rather than let a precarious career position tip you over the judgment precipice into projection or sabotage, allow yourself to feel stalled, rudderless, unbalanced, unproductive or whatever adjective best describes your lack of forward movement. Take some time to feel crappy.* Suffering can be a strong motivator. This may feel counterintuitive: nobody wants to sit with crappy feelings. It’s easier to do than to feel. If your culture doesn’t value the information feelings provide, and discourages rest, you may feel compelled to sprint past the emotions and get on with the work of getting ahead. Don’t. Sheer force might move things forward, but that’s probably not what you want when you’re teetering at the edge of a cliff. The easiest way to sit with feelings is to get them out of your head and onto paper. I’m always amazed at how much power the simple act of “writing my way out of it” has for returning me to solid ground. Second, help someone else move forward. Walking away from your problem to help someone else can provide valuable wisdom. Whenever I coach a client, I listen carefully to the questions I’m asking. Then I ask myself the same questions. I’ve learned that we teach what we most need to learn, making it easy to spot areas ripe for self-discovery. Let go of the belief that you shouldn’t be feeling stuck, cultivate some curiosity about what others might need, and you’ll notice the shift. You’ll surprise yourself with how effortlessly you receive the practical, practice-able information you need.  “Servant” leaders do this all the time. I would have been far more successful, and demonstrated superior leadership qualities if I had faced my fears and let go of my insecurities by asking myself one simple question: “How am I supporting this person’s success right now?” Third, practice emotional self-awareness by employing one simple phrase. A Buddhist teacher once told me that whenever we make a judgment about someone else, we must remember to add a tag line: “And I am that, too.” It’s a reminder of our own imperfect human nature, and it helps us remain humble and connected to others who are experiencing difficult moments. It’s a simple and powerful way to identify projection, and it brings lightness and a sense of humor to our circumstances. If I had said, “He’s incompetent…and I am that, too,” how might that have changed the dynamic and contributed to a more successful and productive working relationship? How might that have facilitated my growth?

Go forward by being still

Despite the uneven nature of everyone’s career terrain, the best and most gorgeous places on the career path stretch before us when we stay in our own zone of genius, fully employ our gifts in service to others, and pause to take it all in. Bright blue skies and rock-solid achievements. Prolific, lush growth.  Make time to take in these spectacular vistas, and see how far you’ve come. We can restore career momentum if we’re willing to stop for a moment and pay attention to every interaction, and be mindful of whether our words or actions are helping or hindering another’s success. If you’re helping, you’re on your way to learning, growth, and career success; nothing pays dividends quite like generosity. If you’re standing in someone’s way, dig a little deeper.     *Note: if you’re exhibiting signs of clinical depression, see a therapist.