Change is in the Air 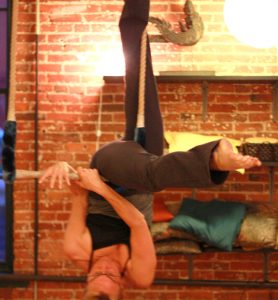 Some issues just seem to come around for me again and again.

People tell me I’m smart.  But certain things aren’t about intelligence—I can’t think them away.

The ability to “figure it out” doesn’t help me when it comes to ancient, ingrained beliefs and automatic deep-neural-pathway triggers.

As much as I’d like to have “I know what it’s about” be the end of it, the reality is that consciousness is just the beginning of the process of growth and change.

It’s like learning a new aerial move—I can know where to grip the trapeze, where to lock my leg, or which way to turn, but until I’ve practiced it to the point where muscle memory takes over and the trick gets done without conscious thought, I have to consciously walk myself thru each step.

Thinking takes time, and aerial time is already a slowed-down version that allows for proper alignment.   As much as I’d like to master the steps from the get-go, I can’t learn a trick without taking time, and making the same mistakes until I’m ready to claim mastery.

Take the “Jacques Cousteau,” for example, a counter-intuitive aerial move that requires me to fall over sideways and land upside down (see photo above), reminiscent of rolling over the side of the boat and heading straight down into an undersea world.

I learn the trick slowly at first, step-by-excruciatingly precise step.  The first time I do it, I’m wicked clumsy.  Fear prevents me from keeping that left leg straight, no matter how many times Mara reminds me how much easier it makes the move.  Eventually, I find myself upside down and locked in a single graceful move without considering every hand placement or leg lock.  One day, after weeks of practice, the neural pathways that include complex systems of motor coordination, balance and timing are in place and I’m on autopilot.

It’s the same thing with changing my beliefs—those clusters of thought that exist in the ‘muscle memory’ of my brain.  Teaching my brain a new ‘trick’—locking in the new pathways—also takes time and conscious thought, only there’s an extra step—breaking the existing pathway.

Like any physical habit that’s become automatic, I have to remember that I’ve learned a new way of doing things in order to stop doing them the old way.

One of my more persistent “old-way” cycles comes around whenever I believe that I Should Be somewhere I’m not.  Further along in my practice.  Making more money.  Traveling to exotic locations to speak to crowds of people.

I trust that you know exactly what I mean.  That you’ve got your own set of pernicious beliefs that dumps you into Bluesville or jumps the tracks at Crazytown. (Do share, so I know I’m not alone.)

When my latest case of Should-Be Fever came around, I suffered the hot-mess symptoms of lack—lack of sufficient work, lack of talent, and lack of inspiration for how to move forward.

I suffered, falling for that old lack story again, and what all that lack meant about me.

I reverted to ingrained habits in an unconscious reaction to career stress: I shackled myself to my desk, obsessively checking emails and perusing Facebook for signs that I wasn’t the pariah I believed I might be.

I eventually broke the spell by consciously stepping away from the computer, a physical move that helped me remember that I no longer believe that I just need to work harder to get what I want in this life.

I remembered instead that I believe that things will change if I let go—loosen my grip—like I do when I’m engaged in an aerial sequence.  The only way I can progress from one aerial move to the next is to let go.  It’s impossible (and exhausting!) to hang on to one position forever.  I have to let go to have an open hand to receive what’s next.

And, invariably, what comes next is something new, more challenging and more fun.

What stubborn old beliefs keep coming up for you?  What new beliefs are you replacing them with?  How can you let the old beliefs remind you to embrace new ones?