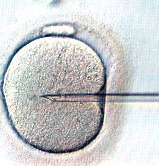 In 2002, two years into our marriage, my husband and I decided the timing was right to have a child. I was 43, but looked and felt ten years younger. It didn’t occur to me that my body wouldn’t comply—after all, it still allowed me to snowboard, mountain bike, and practice advanced yoga.

Believing that an every-other-day, um, effort would produce the desired pregnancy, we dutifully schtupped to the point of exhaustion on Tuesdays, Thursdays and Saturdays.

Unfortunately, the reality of biology meant that in order to conceive at that age, we had to resort to the expensive and invasive process called “ICSI”—an in-vitro fertilization method that required me to produce eggs in quantity via daily hormone injections. The eggs were then removed from my body (did I mention “invasive?”), fertilized by a scientist with a needle containing a single sperm, allowed to divide into two, then four, cells, and finally implanted in my uterus under the watchful eyes of a team of embryologists (did I mention “invasive?”) whose job it was to ensure that they were implanting our embryos, not those of another hopeful couple.

The delicate nature of the decision to try to conceive, and the challenges of the process we had chosen, made it difficult to discuss with anyone other than my closest friends and family. I made it clear to them that our efforts were confidential—I didn’t want to give updates to anyone I hadn’t specifically chosen to tell. I trusted my two closest friends with that information, but somehow things went terribly awry.

It wasn’t until 10 years later that I began to understand what went down, as I read Brené Brown’s 2007 book I Thought It Was Just Me. Dr. Brown included a guide to infertility for family and friends, written by infertility educator Jody Earle, which resonated deeply with me, and matched my experience with confusion, fear, shame, anger, hopelessness and isolation—none of which had reached my conscious mind, but hovered just far enough below to make me miserable without understanding why. I wish it had been available at that time to help me articulate what I was feeling, and avoid the hellish and destructive conversations that followed my discovery that one of the women I had trusted to keep my secret, did not.

If you’ve been through the in vitro process, you know about the hormonal maelstrom that envelops you, making it impossible to sort through your emotions while dealing with the odd physical feelings that accompany full-to-bursting ovaries. I was a strange, nightmarish version of myself, wanting love and support, but unable to allow myself to fully reveal my vulnerability.

My ignorance of the concept of vulnerability kept me from expressing myself clearly and authentically. As a result, my two closest friends didn’t understand what I was going through, and I blamed them for it. I couldn’t be what they seemed to want me to be. I didn’t get a sense of gentle compassion, but felt they were demanding information that I didn’t have, and access that I was unable to grant. I felt their anger more clearly than I felt their love. I’m sure it was frustrating for them, as they wanted to be part of the process, and none of us had the experience or depth of understanding to know how to handle the situation.

Looking back now, I understand that I didn’t feel safe. At all. The vulnerability was more than I was prepared for, and no one around me had the resources to help me connect with myself. I created a treacherous environment by believing it existed, and lived through the ensuing months feeling disconnected and misunderstood. I wanted my how-dare-you-tell-news-that-isn’t-yours friend to know how wrong she was, which put her on the defensive—she blamed me for her error.

That one instance began a pattern of broken confidences and blame, which eventually dismantled that friendship. I didn’t have the resources to set better boundaries to protect myself, or to understand that my habitual process of ignoring pain and vulnerability was no longer serving me.

As horrible as it was, I’m grateful to get some clarity so I can let go of an ancient hurt, and forgive myself (and my friends) for our lack of grace in a situation that we weren’t prepared to handle. It was fertile ground for deep learning, planted long ago.

Do you have a similar story of the effects of hidden vulnerability in your life? Find a compassionate witness to talk to about the pain, shame, and blame of your experience. It’s never too late to learn something important about your life, or to lighten your burden by sharing it wisely.