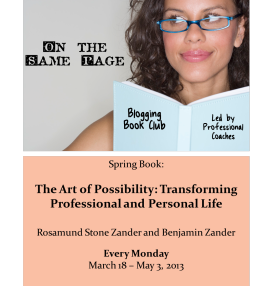 This post is part of “On the Same Page,” a blogging book club led by life coaches Kayce Stevens Hughlett, Betsy Pearson, Kanesha Baynard and myself.  We’re reading The Art of Possibility, by Rosamund and Ben Zander.  If you’d like to purchase the book, click on the cover graphic below, left.

It’s both ironic and thrilling that I was assigned the chapter of The Art of Possibility that had to do with grades.  Specifically, with “A’s.”

From my first day of elementary school through college commencement day, I was addicted to the dopamine rush that came from seeing a bright red “A” at the top of my tests and papers.  Even now, remembering the “A+” I got in third grade, for an assignment to create a Kipling “Just So” story (mine was entitled “How the Zebra Got its Stripes” and followed a story line recognizable to any fan of Pepé Le Pew) gives me a pleasant feeling of satisfaction, accomplishment and superiority.

Yes, it’s true—a long, long time ago my ego identified “A” with superiority, and I never thought to question it.  However, the Zanders’ Chapter Three contention that the “A” is an invention (see Chapter One, “It’s All Invented) turns this understanding of “A” on its head.  Our grading system makes the “A” a measurement that says some students are better than others.

However, the metric behind the “A” can be as arbitrary as the practice of instructing a professor to give one-third of the students in a leadership course for 50 of the most outstanding students at the University of Southern California an “A”, one-third a “B” and the rest a “C,” even though, the Zanders write, “the work of any member of this class was likely to surpass that of any other student” in the 27,000-student population.

Seriously?  They hand picked the top .1% of the student body, then felt the need to assign relative values to their achievement?  How meaningful was that “A?” or the “C” for that matter?

I believe those randomly assigned “C’s” stood for “Crushed!” in the minds and hearts of the high-achievers selected for this class. The lone “C” that tarnished my academic career lives in infamy in a shame-filled corner of my own memory, never to be spoken of aloud.

The Zanders spent some time pondering this practice, and, using the metaphor of Michaelangelo, who saw sculpting as a process of chipping away at whatever was not part of the handsome figures trapped inside the marble, determined that a teacher’s job is to focus on “chipping away at the stone, getting rid of whatever is in the way of each child’s developing skills, mastery, and self-expression.”

By getting rid of the measurement tool, which only measures how the students perform against an individual teacher’s standards, students can be seen for the luminous human forms they really are.

Ben Zander brought the concept to life one September by telling the students in his musical performance class that he was giving them all an A in the class.  He did this not on the last day of the two-semester exploration of the psychological and emotional obstacles to full expression of musical artistry, but on the first.  His only requirement was that they write a letter, due within two weeks, from the perspective of the future.  The letters were to be dated as of May, and had to outline, using the past tense, what the student had done that was “in line with this extraordinary grade.”

The results were remarkable, and the letters poignant and prescient.  All of their fears—of making mistakes, of being somehow “less-than,” melted away, allowing them to stretch the boundaries of their own skills, confidence, and artistic expression.

Mistakes became indicators of that which needed attention, and no longer carried any stigma.  Painful comparisons to others melted away.  Rather than focusing on pleasing the teacher, each student explored their own talent, and expanded their own artistry.

In a universe of possibility, we can grant others an “A,” allowing them to be fully themselves, and offering them the respect we give high achieving people.

In a universe of possibility, we can grant ourselves an “A,” which “lifts [us] off the success/failure ladder…It is a framework that allows you to see all of you are and be all of who you are, without having to resist or deny any part of yourself.”

We can, says Zander, “replace the narratives that hold us back by inventing wiser stories, free from childish fears, and, in doing so, disperse long-held psychological stumbling blocks.”

Imagine the Possibilities: An Exercise in Giving an “A”

Just thinking of giving myself that “A” brings back a happy flood of dopamine.  What does it do for you?  How does giving yourself an “A” change how you perceive yourself?   What can you let go of, knowing that you’ve already earned an “A?”  What might you now embrace, knowing that you have your “A?”

Are there people in your life to whom you haven’t granted an “A?”  What would change about you if you did?  How might they respond to those changes in you?