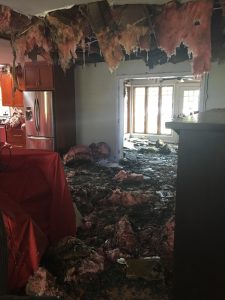 The dining room, the morning after

If you’ve ever engaged in a conversation with me, you’ve probably been subjected to my fondness for metaphor. We all think in metaphors—“this is like that”—in order to make complex, abstract concepts more concrete and easily understandable. We use metaphors several times each minute (see “concrete” above), and according to experts, “It is nearly impossible to describe internal states, abstract ideas and complex notions without using metaphor.”

This thrills me to my very bones.

The best thing about metaphors is their magical ability to help us solve problems and create meaning in our lives by changing our perspective in some way that turns on that light bulb in our heads. (See what I did there?) I’ve found metaphor work to be the best method for understanding my world and how my Self lives in that world. I love metaphors, unconditionally.

As an example of how entrenched my relationship with metaphor is, consider this: as I watched flames engulf my home during the cruelest month of April ever, one of my first thoughts was, “I wonder what needed to burn up?”

As I waited for the fire trucks to arrive, optimistically pointing a garden hose at a three-alarm fire, my first response was an attempt to find deeper meaning.

Perhaps everyone in the midst of a traumatic event has an existential moment, perhaps not. I do recommend it as a way to stay present and curious in the moment, to soothe jangled nerves, and to begin the process of healing on the spot.

The fire had begun outside, then raced through the attic, consuming as much fuel and oxygen as it could get its gluttonous hands on. It melted our trash cans like Velveeta in a microwave, devoured a fence, snacked on the soffits, then tucked in for a hearty meal of roof trusses and sheathing. The damage was far more extensive than we could see—I hadn’t realized that there was an inferno burning above my head as I ran out of the house—and we didn’t see the magnitude until weeks later, after all the ceilings had either collapsed or gotten removed.

So, what needed to burn?

If the trash cans are any indication, perhaps I’ve been a container of cast-off bits that I no longer intend to keep. This feels true, as I still struggle to let go of beliefs that are useless remnants of things I’ve “learned” that no longer serve me. These are big things like ignoring my body’s signals when something’s amiss because I believed for so long that the thinking mind was the only one that mattered. Things like keeping my honest, present moment feelings hidden because I learned to keep them to myself, preventing anyone from seeing my vulnerability, which would surely set me up for serious pain.

And what about the fence? It was crafted as a screen to hide the trash cans. Maybe the message is that there’s no need to obscure what’s messy or ugly or stinky or no longer wanted. Perhaps it’s time to reveal more about my own mess; allow it to be a visible part of the whole of my life.

The attic sustained the most damage. Most of us use an attic for storage: it’s the place where we tend to keep the old stuff we no longer need, items that we never reach for anymore. Irrelevant things that we don’t even realize are still up there collecting dust and creating, um, a fire hazard.* It’s a perfect metaphor for my head, full of things that no longer serve me, that I haven’t been ready to let go of. Trunks filled with stuff that didn’t belong to me in the first place.   Childhood things. Childish things. Things that deserve to be melted into cheese puddles and whisked offsite to the dump.

As my existential line of inquiry continued, I asked myself the opposite question. If I understood what needed to be destroyed in a scorching sea of flames, I wanted to know, “What’s being created?”

I sat quietly and waited for an answer. Within moments, it floated up: “Space.” Space that’s devoid of garbage no one needs. Clean, empty space for the expansion of ideas and connection and service. In my post-fire paradigm, I want to fill up my space with great work, kindness, and humility.

In case I didn’t get the message from the trash cans, the attic reinforced the lesson: it’s time to clear out whatever junk has been occupying space in my being, to allow something new to inhabit my Self’s beloved dwelling.

Now that my metaphorical and non-metaphorical contractors are done with the demolition, it’s time to rebuild.

*Full disclosure: our attic was empty. In fact, there was a seminal moment when the insurance adjuster asked, “Can you give me a list of possessions that were consumed by the fire?”

I paused and thought about this for a moment, then laughed. “Two trash cans,” I answered. “Just two trash cans.”

Everything else still existed—sopping wet, smoke damaged or banged up by the firefighters, but it was all still there, waiting to teach me more about where my Self resides.