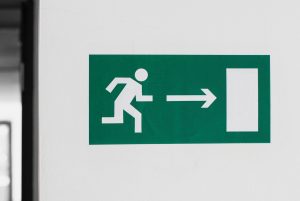 What would you grab if your house was on fire?

We’ve all played that game where we imagine that scenario and name the precious items we’d be devastated to lose: wedding pictures, grandma’s necklace, computer, precious artwork. The cat.

So, what would I grab? I can tell you exactly.

When the dispatcher commanded, “Get out of the house—NOW,” I followed his orders. I ran outside in my pajamas, barefoot.

Here’s what I grabbed on the way out:
Nothing.

I didn’t spend so much as a nanosecond thinking about valuable possessions, and I had no idea where the cat might be. I left my glasses and hearing aids on the nightstand, rendering me somewhat blind and mostly deaf. And wholly alive.

I ran toward the back door. Bright orange flames engulfed the kitchen window. My limbs propelled me forward, auto-piloted by chemistry, biology, and physics over which I had little control. Oblivious to the chilly April night and Satan’s minions—the countless, treacherous sweet-gum balls that pierced my feet as I ran—I grabbed the hose from the front yard and wrestled it around to the back of the house.

We stood there, my husband and I, with garden hoses optimistically trained on a fire that firefighters would later tell us was about three minutes from erupting into a house-obliterating inferno.

A house fire is the mother of all lessons in present moment consciousness, asking for help, and setting boundaries. As the minutes, hours, days and weeks have unfolded, so have the lessons that every trauma affords.

Because I’m a generous soul–and I want each of you to be prepared for the unlikely event that you’ll be startled awake in the wee hours by your spouse flicking on the bedroom lights, throwing the phone at you and yelling, “Call 9-1-1, the back deck is on fire!”–I offer the following advice.

If you ever have the misfortune of watching flames engulf your home, and you stand safely out of harm’s way, take a moment to connect with a sense of gratitude. You’ll need to remember it later when the nightmarish flashbacks and horrific recognition of what-might-have-been barge in on you, uninvited, mostly after bedtime.

Call a friend. They will be there within moments, watching out for you. They know your idiosyncrasies. They will recognize when you’re completely losing your shit, and make decisions you’re not capable of making. If you’re as lucky as we were, there will be on-site battlefield-tested acupuncture to ease the shock from the trauma.

Allow your own feelings to have their way with you, and try to ignore the foolish things people say or do over the next few days, as they will respond to your situation with their own feelings front and center. Honor your own terror and exhaustion first.

Be prepared for the rollercoaster you’ve just boarded. Even though you know it’s coming, when the bottom drops out, you’ll feel unmoored. It’s just how physics works. Don’t be surprised when an involuntary gasp of terror escapes your lips for no apparent reason. Especially after bedtime.

Try not to bitch-slap anyone who says, “You poor baby!”, or some variation. You may not be feeling particularly sorry for yourself, and have no desire to be pushed into the pity pool. Instead, say (as kindly as you can), nothing. This will lead them to babble on for a while longer, but eventually their voices will trail off. You will notice who goes there. You will question whether they are of your tribe. You will refocus the conversation on what’s present and positive, because you can.

Accept as much help as you can use. If you’re as lucky as we were, there will be more people offering help than you know what to do with. Sally was the first on the scene the following morning. She simply showed up, wearing work gloves, as soon as she found out. I’ll never forget her kindness, and that moment allowed me to take in how loved and supported we are.

If you think you can’t find a way for people to help, tell them your next few tasks. At least one of them does not require you to do it. In my case, one of the most helpful things was Janelle’s offer to keep the newly-planted garden watered and tended (which involved running hoses and poaching water from a neighbor, as we had no electricity and therefore no well pump). She knew how important it was for me to have that counterpoint of life and growth.

Embrace the little kindnesses. Suzy and Charlie left a basket containing all-things-chocolate, and Carol walked over with a package of homemade brownies. Somehow they understood the power of chocolate when your ceilings are on the floor under six inches of wet insulation. Bringing sweetness to a difficult moment is never a bad idea.

Allow yourself to not talk about the fire with people who make you feel unsafe or potentially judged in their presence. “How did it start???” is not a question you’ll want to answer, especially if you imagine you could have somehow prevented it. “I’ve told the story so many times lately, and I’d rather not tell it again right now” is a valid boundary.

“Are you all right?” is a question you won’t be able to answer. Obviously, you’re still standing, but your life will never be the same. You’ll never go to bed at night innocent of the reality that you might be awakened suddenly by the sound of a crackling fire that is not in your fireplace.

“How is it for you today?” is a question you can answer, but almost nobody thinks to ask you that way.

For weeks afterward, you will not feel like being in groups of more than one or two others at a time. You will turn down some invitations and accept others. It may be impossible to explain why, but you will know that it has everything to do with the intimate nature of sharing trauma.

You will need compassionate witnesses, but you get to choose who they are.

There will be one ass-hat in your neighborhood who strides up your driveway at sunrise the next morning to gawk at the damage behind your home because it’s not visible from the street. Don’t expect him to reach out and offer help. He is not your friend. He will toss things in the dumpster sitting in front of your home that is meant for several tons of fire debris, leading you to zero in on his lack of common decency.

He will teach you the limits of your generosity of spirit, and give you something to obsess over that helps you forget the pain of the fire by diverting it into self-righteous indignation. You will discuss the incident with the arson investigator, who will tell you that you’re lucky there was only one ass-hat. You will discuss the incident with the local police, who will advise you to formally notify him to stay off your property and out of your dumpster. They promise to watch the house and haul the ass-hat into court if he sets so much as a gnarly toe on your property. You will feel vindicated, yet awful.

You’ll feel vulnerable and human and out of control while crews strip every dish, lamp, candle, article of clothing and stick of furniture from your home. They will take a meaningless inventory which will never match up to what you once owned.

At first it will freak you out, especially when you get your clothes back, and find someone else’s XXL granny panties mixed in with your own dainties, and scuffed sandals with unevenly worn heels thrown in with your dressiest Stuart Weitzman’s. A kufi mixed in with your favorite cowboy hat. Someone’s beloved Ravens apron in the same bundle as your most extravagant bed sheets.   After fretting over whether some important bit of your clothing has ended up in someone else’s “W/F” box (wash-and-fold, although I wouldn’t blame you if you thought it stood for something else), you’ll direct some anger at the dry cleaning company for its haphazard process.

Eventually, you’ll stop obsessing. You’ll let go of what has disappeared, and realize that your life is not going to be impacted by a missing item that you can’t even remember you had. You’ll laugh when you see five pairs of stained and paint-spattered work shorts on hangers, freshly pressed from the dry cleaner. You’ll be annoyed when you realize your favorite work dress is missing.

You’ll say to each other, “Jesus, we have a lot of shit,” and you’ll be glad for the opportunity to purge, filling box after box for donation. You’ll focus once again on gratitude, and the fact that it’s just stuff. You’ll wonder if you’d feel differently if the house had burned to the ground, and whether that might have been easier. You decide that you would be equally devastated and liberated.

As the work of demolition and rebuilding begins, you’ll have a massive psychological crash. You’ll be pissed at the people who predicted it because you have no idea how their prediction was supposed to help, and you hate them for being right. You’ll hate everything about that crash.

Over time, you’ll feel your feet underneath you again. You’ll be able to function at work and in social situations. The tasks involved in getting your house rebuilt will stretch on for months, but you’ll learn your real tolerance for setbacks. You’ll fight to remain patient, fail, succeed and fail again at keeping your impatience from overtaking your gratitude and stripping you of kind impulses.

And you’ll never again wonder what you’d grab if your house was on fire.