Lies My Lizard Told Me 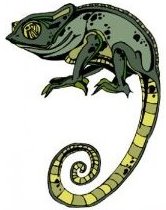 In the interest of “live-it-to-give-it,” I sometimes go a little over the top.  A recent episode was no exception, and I have Fear Incarnate, my trusty lizard “G.I. Jane,” to thank for whirling me into a fearful frenzy so splendid that traces of lizard barf have been found in remote regions where humans are significantly outnumbered by mule deer.

I completed my Martha Beck training course a full two weeks ago, and I still don’t have a six-month waiting list of clients, haven’t designed dozens of sold-out teleclasses, haven’t delivered any highly-regarded, also sold out experiential workshops, or written a best-selling book that would prove once and for all that I am a font of eternally relevant Wisdom.   Slacker!

I haven’t written a single blog post since then, either.  And that’s where this story begins.

I was having trouble writing about self-love and how it’s sometimes confused with narcissism or egocentrism, which we’ve all been taught to shun.  Despite some obvious difficulty expressing my thoughts, I soldiered on, driven by Jane’s insistance that my lack of post-graduate blog posts meant something about me, and it wasn’t good. I ignored the fact that I was fighting the flow, struggling with the topic–at a loss for how to talk about it.  Had Jane not been dressed in her usual camouflage, I might have noticed and thought, “Hmmm.  Maybe I’m not ready to write about this.”

Instead, I reached back to a conversation I had with a colleague to illustrate.  It didn’t fit, exactly, so I tried tweaking it in a way that made it fit, but also made it less than true.  Blech.  When I sent the concept to her, the aforementioned lovely and honest colleague pointed out that it lacked the “ring of truth.”  I scrapped the post.

Although it felt enormously icky to have attempted to mold the truth to placate my lizard, it was a brilliant opportunity for me to question my thoughts about what I should be doing, and where my practice should be, that if I don’t and if it isn’t, I will be stealing sheets from neighborhood clotheslines to use as curtains in my cozy refrigerator box beneath the overpass. I got a chance, once again, to witness the destructive force of my Inner Comparinator, which made Hurricane Irene look like an amateur.

I’ve learned that when thoughts cause pain, they’re simply not true, and can lead to destructive behavior.  What is true? I’m exactly where I’m supposed to be.  It’s time for observation, growth and integration, not comparison, judgment and worry.

If you’re sure you are the only one who’s been driven to regrettable behavior by fearful thoughts, rest assured, I’ve taken a leadership position on this one.  When I allow Jane to take command, I wander far from authenticity, disconnect from the present moment, and miss the opportunities for joy that surround me.

What lies has your lizard been telling you?