My Fear of Failure

I’ve been collaborating with aerial instructor Mara Neimanis of In-Flight Theater to create an experiential workshop we’re tentatively calling “Get Bigger Than Your Britches,” to explore how to break through those things that have kept us, and our lives, small. As I was noodling the best way to write copy for the flyer, I realized something startling. 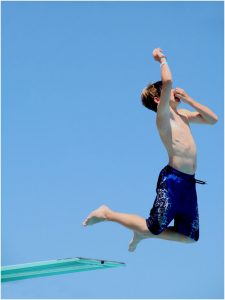 I have never been afraid of failing.   I’ve just been terrified of the consequences.

I haven’t been separating the act of failing from how I felt about myself, and what I make it mean when I fail.  There’s a huge difference between the act of failing, and internalizing the message “I AM A FAILURE.”

Every big dream I’ve ever had, every amazing idea, got squashed by my Inner Critic.  All the reasons I haven’t followed through have to do with the paralysis caused by the fear of feeling disappointed or unworthy.

Add my fear of not making the idea work financially; never mind how much fun I’ll have and how much I’ll learn in the process.  Oh, yes, and what about all that Precious Wasted Time?

Sprinkle in some fear of how I’ll be perceived by others—“ridiculous! Pie-in-the-sky!  Get a REAL job!”—which is just an enlarged projection of what my own, harsh inner critic will tell me.  I have to face the fact that there may be some people who look at me as if I just ran naked through the chambers of Congress (while they were in session, of course), but so what?  What if someone, EVERYONE, laughs at me?  Do I need their approval more than I need to follow my dreams? As Joni Mitchell sang in “Twisted”:

I realize that I’ve mostly been terrified of myself and my feelings.

Will I survive feeling crushed?  Is it possible to be kinder, more encouraging to myself?  Could I learn to forgive myself for whatever might “go wrong?”  And does anything really “go wrong,” or is everything that happens simply a part of my path?

Failure is so subjective—do we ever really fail?  Or do we just learn something new?  Thomas Edison, after thousands of attempts to invent the light bulb, famously remarked that he did not fail ten thousand times, but rather learned ten thousand ways that didn’t work.  Every highly accomplished soul on this earth has failed, and failed again, in pursuit of the things that were meaningful to them, and served others.  We admire them and are grateful for them, even more so for the skepticism they endured.

It’s been said that we never really fail at something we truly, madly, deeply want to accomplish—until we give up trying.  What dreams have you given up on?  How are you keeping yourself small?

(Shameless promotional marketing:  Save the Date—July 14th and 15th—for “Get Bigger Than Your Britches” workshop in Baltimore.)