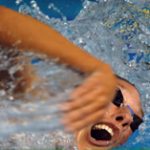 You may remember some of my posts about magic from last spring, where a stick of gum and a bent spoon were both the result of a bit of ‘mundane magic.’  Since those days, whenever I hear someone else talk about some magical or synchronous event, I feel a pang of excitement and even a little jealousy, as I just love, love, love when it happens to me.  The excitement isn’t a problem, but the jealousy has led me to understand that I have had a bit of attachment to getting my own share of the magic, which ironically is the best way to prevent those mystical occurrances.

Whenever I get a little obsessive about something, I’m only able to relax and release after some inspiration or intuition graces me with its presence.  This happened recently while swimming at the county pool.

Instead of counting laps, I focused only on my breathing.  Every fifth stroke, I’d pull in enough air to last until the next in-breath, and spend five strokes releasing that breath in a stream of bubbles.  I found that between the focus on my breath and the otherworldly sound of the water as I blew out, I achieved a deeper meditative state.  Time passed quickly–a good sign that I was in my own zone of contentment.

Toward the end of my 45-minute swim, a little voice in my head said, “You know, you can just call it all in to you–everything you need and want–just call it to you.”  Since I had just finished reading Martha Beck’s latest book on the technologies of magic that are used by shamanic healers of all cultures (inspiration), I choose to believe that my little voice was right–I could just ask for what I need and want, even if I wasn’t sure exactly what those things might be (intuition).

When I returned home, the phone rang.  The business reporter for the local paper was on the line asking if she could come by on Thursday with a photographer to do a story on my journey “from finance to self-discovery.”  Hmmm.

Full disclosure–she didn’t call out of the blue.  I did have some contact with her weeks earlier, but I had mostly forgotten about it because I was so engaged in working on programs for 2012.  (She did tell me she’d follow up, and I was able to let go of my inner sales manager, who would have loved it if I called her relentlessly until I closed the deal.)

I have known, on some intellectual level, that letting go of outcome and just asking the Universe/God/Spirit Mother/Great Veiled Bear or whatever forces exist out there to support me, heal me, guard me and keep me safely on my path, is all I ever need to do.  Actually achieving that state on a reasonably consistent basis will take practice, and in the meantime, I’m thrilled to my core whenever I get a glimpse of the magical peace and connectedness I feel when I do get there.

The tricky part is to return to that state whenever fear or ego returns to jolt me out of that place.  It’s like catching air on my snowboard, where I’m in a state of pure grace until I realize how high and how fast I’m traveling, then try to stop myself before I’ve fully executed the jump, out of fear that I’ll crash.  If I allow myself to fly, I complete the process and solidly land it.  If I contract with fear, I inevitably become a train wreck of twisted body parts and clanging helmet.

I’m just learning how it feels to call home all the good things, without worrying about what will or won’t happen, or whether I even deserve the goodness.  It’s not easy to rewire my thinking in this way, but I’ve got unlimited long distance, so I guess I’ll keep making the call.  If nothing answers, I’ll try again tomorrow.