When Dog Barf is Good

As an Insight Coach, I am particularly fond of the twists in life that generate Aha! moments, especially when there’s a generous helping of irony in the mix.  Such a moment came recently to my friend Grace (not her real name).

Grace loves for things to be in order.  Her house is perennially tidy, inside and out.  Any stray chip of driveway gravel that sneaks out into the lane is promptly returned to its place, and any gumball (awful, spiky balls that fall by the thousands from sweet gum trees) with the misguided notion that it will sully her landscape is relegated to the gumball equivalent of Siberia.  You can eat off the floor of her garage, the interior of which she recently painted.  White. 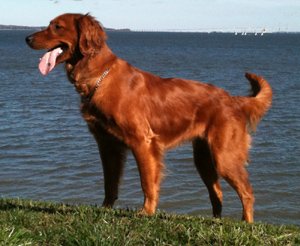 Imagine her horror this week as she watched her 75-pound Golden Retriever puppy (a calendar-pin-up-gorgeous creature with the sense of a chip of driveway gravel) swallow, whole, a large chew toy purloined from a neighbor’s dog.  The toy was described to me as having “a head the size of a chicken and long fuzzy legs, like a monkey, with flappy feet at the end.”  Her distress at the swallowing was matched by her guilt that the dog ate a toy that didn’t belong to him.

After a conversation with her vet about the risks, Grace decided to try giving the dog a couple of tablespoons of hydrogen peroxide to induce vomiting.  It worked instantly, causing the dog to spill the contents of his dinner, but no long-legged fuzzy chew toy.  Worse, the dog began to make horking noises that sounded as though he might be choking.  Grace immediately put the dog in the car and set off for the vet’s office, in a river of tears, convinced that she was responsible for an unspeakable tragedy about to unfold.

Fortunately, a few interminable minutes later, Big Red gave one last terrible hork and out shot the chew toy, and the remaining contents of his stomach, all over the back of her immaculate car.

In a flash of insight, Grace saw that there can be times when even something as messy as dog barf is welcome in our lives.  Her grateful acceptance of the slimy glop in her car helped me think about things I deem unacceptable or tragic that, with a little shift in perspective, and a modicum of humor and self-compassion, might actually trigger gratitude.