When “Not Today” is Better Than “Never” 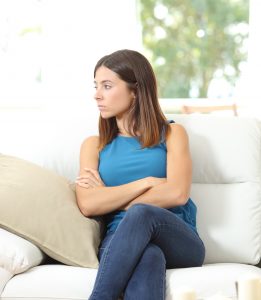 In the course of conversation with a friend last night, the topic of family relationships came up. Listening intently, a nifty skill I picked up in coach training, I noticed that she used the word “never” to describe future interactions with her sister.

“I’m so done. I’m never going to see my sister again. It’s just too…” she said, trailing off just when a few more words might have gotten her to the core of things. Perhaps she felt there was no adequate adjective, or maybe there was some uncertainty about exactly what was “too” something-or-other.

Despite my curiosity about what was “too…”, intuition led me to focus instead on the permanence of such a decision.

“Done” with her sister and “never” again seemed like a pretty big commitment, and a distressing one to ask of herself, judging by the pained expression on her face as she spoke.

I wondered, aloud, “What if, instead of ‘never’ seeing her again, you just decide not to see her today? And maybe tomorrow you wake up and make the same decision—nope, not today. And what if that went on indefinitely, you feeling like, just not today, just not this moment, maybe some other time, and right now you don’t have to know how many moments in a row you’ll make that same decision? And then, what if one day you wake up and think, hmm, maybe. Maybe today is the day it’s okay to think about re-engaging with her. That might not happen, but you don’t have to know that now—you can’t know that right now. Why not leave something open? You can continue to not see her for as long as you like.”

She stood back from the kitchen bar where we’d been leaning in for our conversation. She tilted her head back and lifted her hands as if struck, which in a way, is exactly what had happened. “Whoa,” she said. “That is amazing. It’s just a different perspective, but it makes a big difference.” I could see the tension drain out of her body, the relief washing over her. She softened visibly. The grimace was gone. Her smile returned.

After another moment’s consideration, she brightened even more, her eyes widening. “Whoa,” she said, as the full impact of letting go of “never” resonated inside her. It was amazing to witness, like watching a flower bloom in time-lapse.

Just as she returned to her higher, more compassionate self, I realized something about myself.   I do this sometimes—make a pronouncement I may not be capable of following through on, because I believe it will protect my heart. Ironically (because the universe truly digs irony), in doing so I close off a possibility, separating me further from my tender heart, and painting myself into a corner.

When we do this sort of thing, we risk being led over the edge of a cliff by our now-exposed ego, which will take drastic measures to save face. “I said I was done, so I’m done, even though in my heart-of-hearts I feel not-done.” We’re stuck feeling as though we’d rather die at the bottom of the canyon than get off our high horse, even as it races toward the rim.

Instead, we can decide to stay present and talk about what’s true for us right now.

“Right now, I don’t want to be around my sister. In fact, I can’t even imagine it.”

Come to think of it, perhaps such pronouncements all boil down to failure of imagination, which is normal during chaotic periods that carry high emotional charge. We can’t imagine any other way, because we’re busy roiling beneath the surface, out of control, getting pummeled by the turbulence of new experiences and conflicting feelings.

It’s impossible for me to know whether this was true for her. I can’t know exactly how she will process this new paradigm, but from what I witnessed, staying present seemed to feel better than projecting into the future. Remaining open felt better than driving a stake into the ground or building a wall. It is a more compassionate, more self–compassionate, way than forcing herself to make an indissoluble decision (that she seemed not to want to make) to end a relationship with a family member. It gives her the space and time to grow, to heal and perhaps to have a change of heart, perhaps not.

At least not today.