Why I Want to be More Like My Cat 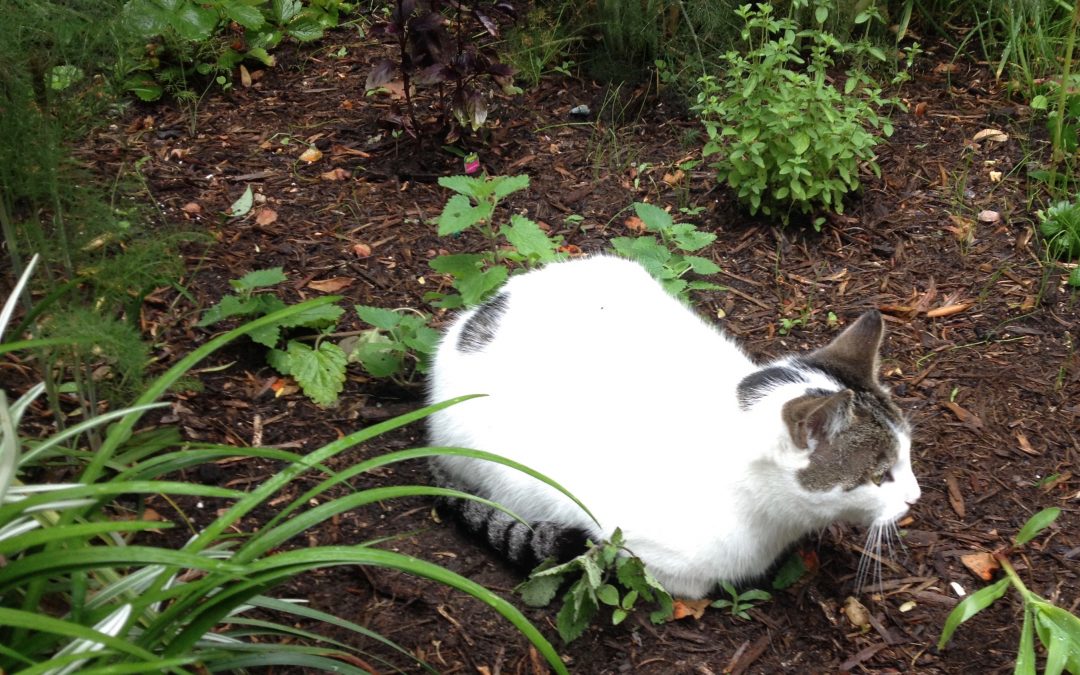 I was in the garden, watering my flower garden, when I doused my favorite cat, LindaRonstadt, with a spray of cold water.

It was a mistake, of course.

She bolted out from under the bushes where she was hidden beneath the foliage, and scampered across the lawn, out of range of the hose nozzle.

She didn’t make up a narrative about how careless I am or how I should have given her fair warning.  She didn’t hold it against me.  She wasn’t mad at me, nor did she treat me to days of passive aggressive behavior to convey her annoyance.

I’m pretty sure she didn’t even associate the dousing with me.  To her, it was just a thing that happened.

She got out of the way and went on with her life.

She might be more wary of the hose, but probably not. She’ll continue to live the way she wants until she happens to get caught by a hose or a hailstorm, which I promised to tell you about.

A sudden popup shower hit us last weekend with no warning on the radar, not even a menacing black cloud to alert us of impending precipitation.  The sun was shining as the giant raindrops fell, so I didn’t even stop pruning the unruly butterfly bush in the back yard, thinking it would pass quickly and be a relief from the stifling heat. I hardly finished the thought when a torrent of pea-sized hail drove me into the carport.

Miss Ronstadt, having never experienced the sting of a hailstone or the distinct noise of thousands of tiny ice balls pinging off the roof, ran, half-crazed, to the front of the house, then streaked back across the gravel and into the carport.  I’ll never forget the look of panic on her face or the flattened shape of her full-tilt stride as she squeezed under the car for safety.

Does she now gaze at sunny skies with a sense of impending doom? Nope.

Will she streak back into the carport in a panic if it happens again? You betcha.

Next time somebody hits me with a metaphorical spray of cold water or pelts me with hailstones, which in literal terms might be anything from leveling some judgment or criticism at me or my work, or by cutting me off in traffic, or offering me service without a smile, I can use the lessons that my wise feline friend brings to mind:

-Don’t take it personally.  Even if someone does a thing that harms me on purpose, that’s on them. I’ll probably have the sense to avoid the hose-wielders in the future, but I’d like that to be because I’m focused on rolling around belly up in the flowerbeds watching butterflies rather than obsessively watching the trolls armor up.

-If it’s not important or life threatening, let it go. To the drivers who cut me off without actually causing an accident (potential doesn’t count), I think of my own circus, filled with my own monkeys. I don’t dwell on revenge, but I will indulge the occasional revenge fantasy, which usually means hoping that there’s a cop up the road who has a hard-on for aggressive drivers.

-Don’t worry about the bad thing that hasn’t happened yet, even though it certainly could. LindaRonstadt goes about her daily cat business until the bad thing happens, at which time she deals with it effectively and energetically, because she isn’t worn down by the pre-worrying.

I know people who are ruled by their fears to the point where they won’t drive on an interstate (forget about flying!). And not because they’ve ever had a terrible accident. In fact, it’s possibly because they haven’t yet, and pay their tuition to the Next-Shoe-to-Drop School of Living Fearfully.

It limits the range of their journey, if you know what I mean.

I want to be more like my cat. Knowing when to bolt for cover, and where the safe places are, might be the biggest takeaway of all.